Do people shape a place or does the place shape the people that inhabit it? In Alice Springs it’s hard to tell. The landscape is like nowhere else in the country, and that could also be said of the inhabitants of this small city that sits squarely in the centre of the Australia.

“The desert is a place of resilience. We adapt and we survive and thrive against the odds. We are used to innovating, we muck in and we get things done,” says Sarah Brown, CEO of Purple Heart, an Indigenous-owned and run health service operating 18 remote clinics and a mobile dialysis unit from its base in Alice Springs.

“At its essence Purple House is about family and compassion,” says Brown, who was named HESTA Australia’s Nurse of the Year in 2017. “It’s about love and hope! Yes, people suffer from ill health and poverty, but the goodwill and good humour here is infectious! If we can maintain dialysis services of high quality in the most remote parts of Australia, there is nothing we can’t do together.”

Remote Indigenous people in Central Australia are up to 30 times more likely to suffer from kidney disease, with families forced to move off their country and come to Alice Springs or Darwin for dialysis treatment, leaving communities without elder leadership and weakening the culture. Purple House’s mobile dialysis units and remote clinics have helped keep families together in their communities.

“Being back on country is number one,” says Brown. “It’s hard to fully explain the significance of the importance to individuals and families. In a broader context, for cultural heritage to be passed on, the right people need to be in the right place at the right time. If not, we are all at risk of important knowledge about country being lost forever.”

Groups that come to Alice Springs are welcome to visit Purple House to witness and experience the wide-ranging work they do.

“Our bosses (people from the Western desert) patients and their families are proud of this place and what they have achieved,” says Brown. “They want to share their story and bust some stereotypes about remote communities. They also want to be able to help other communities and other dialysis patients.

“Hopefully, visitors pick up that there are creative, innovative ways to look at tricky problems, that Aboriginal cultural priorities and concepts of well-being have something to teach us all.”

Another Alice Springs based success story that should bang the drum about their achievements, literally, is Drum Atweme (pronounced at-ooom). But this is not about accolades, of which they have many, it is about human achievements, which in this case means giving young Aboriginal kids a reason to stay in school.

The drumming group was formed back in 2004 by youth coordinator Peter Lowson, who was simply looking for a way to motivate at-risk Aboriginal girls to attend school every day.

It was a simple premise, to stay in the drumming group they had to stay in school.

“Drum Atweme started as a schools and vacation care program, from this it just grew from our first performances which were pretty raw,” says Lowson, who received the Order of Australia for his work.

“As we started to get more work and get paid for this, we realised we had to work on making a better show of what we were doing. The children were really keen to develop ideas around their culture, language and how the rhythms would work with this and this is what still drives the group 15 years on. We are always developing new ideas to strengthen the performance and to give something that is fun, educational to our audiences.”

Drum Atweme have since performed at over three hundred community, conference and festival events, including the Adelaide fringe festival and Tjungu festival at Ayers Rock Resort. And this from a group of kids, some of whom have never been to a city before.

“Drum Atweme works really well with conference groups as it is very interactive and lots of fun as well as being insightful,” says Lowson.

“People take away good positive feelings and a connection. The children gain a lot of confidence, respect from performing and some ownership of what they are doing.

“You learn from the kids in many ways, especially the development of new ideas and also the way they approach performing, which for some of them is just a fun game.”

But everything comes back to the children, with 400 counting themselves among the group’s ranks over the 15 years.

“Many of the performers who are now adults have done really well, many have employment from trades to admin work and some still come along to help with touring and performances,” he says. “Even the mothers of children call themselves ‘Mum a drum’.

“The most rewarding thing is that they go on to do positive things with their lives and that they are happy.”

Alice Springs has stories of hope and transformation that stay with people forever once they have heard them. But it’s not the only reason groups come, as the landscape itself has a transformative effect on those who see it often for the first time.

Audiology Australia brought their biannual conference Sound Exchange to Alice Springs in 2019 for one simple reason; “there is nowhere else like it in Australia”.

“The way I look at it, it is a once in a lifetime destination for many people,” says Savio D’sa, Audiology Australia’s marketing and education manager.

Held at Alice Springs Convention Centre, the conference attracted just under 400 delegates, with a roster of international speakers contributing to its workshops, lectures and panel sessions.

“With the nature of this event, we like to go outside a capital city, to make it more of a destination event for us,” says D’sa. “A destination that makes keeping the delegates together easier is also a big factor.”

To create a visual theme for the conference, local Indigenous artist and Aboriginal health practitioner Margie Lankin was commissioned to create an artwork which depicted the story of how communication has been used to carry stories for many years.

“She was the perfect fit for us,” says D’sa. “Alice Springs as a destination actually makes your work as a planner so easy to create a unique experience.”

A networking event at the Talapi art gallery continued the theme of creative expression, with the tasting menu focused on Indigenous flavours helping reinforce the sense of place. The gala dinner at the Telegraph Station took things up a notch with the theme ‘Priscilla meets Crocodile Dundee’.

“The feedback from the delegates was phenomenal,” he says. “Once we got them there, they didn’t know what hit them. The problem we now have is how we top that with the next one.”

To find out more about holding an event in Alice Springs head here. 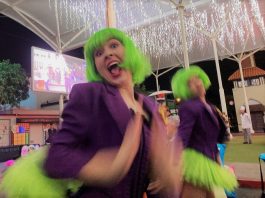 The Gold Coast puts people first as it welcomes back events